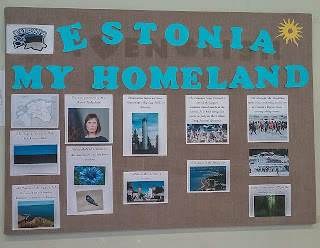 9 - year students wrote about our homeland-Estonia.
I`d like to thank Miina Aleksandra Piho. Her writing is the best.

Estonia is a small country in Northern Europe. Our neighbours are Latvia, Sweden, Russia and Finland. We are one of the Baltic countries and we are also a member of the European Union. Six years ago we changed our currency to Euros and now it`s a lot easier to travel around Europe because you don`t have to change your money every time you enter a new country. The highest power belongs to the people and the President of Estonia is Mrs. Kersti Kaljulaid. She is the first female president Estonia has had.
The population of Estonia is about 1.3  million people. Most of them are Estonians, but we have a big amount of Russians and other nationalities too. Sadly we are not very tolerant to other nationalities.
We speak a beautiful language - Estonian. Our language is very similar to Finnish and sometimes we can talk to each other without knowing each other`s languages.
I really like the landscape and nature of Estonia. We don`t have high mountains or deep canyons, but we have a lot of magical forests and wonderful bogs. Also, we have a large sea border and a lot of islands - 2,222 to be exact and if you want to go camping near the water, you can choose between lakes, rivers and sea.

I really like to live in Estonia because it is a small coutry with a beautiful nature and it doesn`t take long if you want to travel from one side of Estonia to the other side.

Also there are some sentences of other students.

The biggest hill of Estonia is  Suur Munamägi which is located in Haanja. Suur Munamägi is not far away from Haanja School. The flag of Estonia  is blue, black, white. The cities of Estonia are much smaller than in other countries.
There are no dangerous animals such as scorpions or big snakes in our country.
I think Estonia is a nice country to live in.

.............The north part of Estonia is flat, in the middle there is a big lake Võrtsjärv, in the south there are some hills which are called Munamägi and Vällamägi. The biggest lake is Lake Peipsi. It is in the east part. Half of the lake belongs to Russia. In Estonia there are lots of forests. 51% of the whole area is covered with forests. In Estonia Song Festival is held every 4 years. They are very popular. People from all over Estonia come to sing there.
I like living in Estonia because the air is clean. You don`t need to buy any drinking water, and around us there is wonderful nature. We have many lakes, rivers, hills and swamps.
I think that Estonia is also great because there isn`t any nature disasters.

.............The national flower is a cornflower and the national bird is a swallow. There are a lot of forests and rivers. The longest river is the River Emajõgi.
I like living in Estonia because there are no wars.